eThree Media provided a combination of grip, electric, sound, and drone aerial services for the production of several videos honoring visionary golf course designer Pete Dye. Dye designed Hilton Head Island's Harbour Town course, which has featured as the first stop after Augusta National on the PGA Tour for many years, and it is the focus of this piece. The video was produced and directed by Tony Richards, of Nouveau Richards Productions in St. Louis, Missouri.

Motocross and Supercross riders are true athletes, and the elite train constantly, both on and off the track. In searching for a partner to help build and maintain the appropriate tracks needed near Center Hill, Florida, Baker's Factory chose JCB as their equipment provider. In this video, the principal staff at Baker's Factory tell the story of how they came to partner with JCB, and how that decision has impacted their operation.

For eThree Media, the challenge of telling this story, condensed into an easily digested four-minute piece was compounded by some stubborn central Florida rain storms that threatened to wash out the entire shoot. Flying our drone between the rain drops and stealing moments afforded by a state-of-the-art weather radar app to shoot outdoor interviews, we were able to gather just enough footage. Fortunately, being such a premier facility, Baker's Factory is constantly being filmed by a variety of productions, and so when we asked for some Motocross footage to help round out what we were unable to gather on our trip, they could help us out. Matt Dale, who operates their machines, also has a helpful habit of filming time lapses of his track building and maintenance, so his GoPro footage came in very handy as well. The result represents a true team effort between these three companies to breathe life into what is truly a unique and compelling story.

eThree Media completes work on a new comprehensive corporate history video for Great Dane, the Savannah-based manufacturer of commercial transportation equipment.  Over one year in the making, this project required a deep dive into the company's story, which covers more than 115 years.

In collaborating with Great Dane for over 17 years, the eThree Media team has a unique insight into the culture and evolving nature of the dynamic company.  Staying aligned with the voice of the brand was a mission critical aspect of the job, and one with which we are proud to have been trusted.

When the need arose, JCB chose eThree Media for the rapid production of their Teleskid product reveal video.  This new machine represents the first of its kind -  a skid steer loader that has telescoping capability.  Theirs was already the only skid steer machine that uses a single arm and side door entry.  In complementing that unique design, JCB now offers significant additional comptetitive advantage over any other manufacturer.

Because the unique telescoping single arm is the standout feature of the new machine, it receives the penultimate placement in the short teaser video.

Due to the need for immediate roll out to their dealer network prior to public release, the production window was incredibly short.  With only four hours notice, the request to produce the video was met by eThree Media on location with all necessary equipment and personnel.  Fewer than twenty-four hours later, the final video was approved and ready for events.  Although such a turnaround time is highly unusual, it was an exciting project to coordinate and produce, including everything from the creative treatment, shot list and post production, which all took place within a single day.  This project encapsulates the surprise and fun that can come through great trust and great support built on the foundation of a good story.

eThree Media produced drone shots that open and close the newly released trailer for Chiller's upcoming feature release, Siren.  Director Gregg Bishop requested a series of aerial shots piloted by eThree Media's principal, Eric Darling, with camera control by camera operator, Tim Gill, who also served as 2nd Unit DP on the film.  The original drone footage serves both as standard shots as well as plates for several special effects shots in the upcoming horror movie based on a short contained in the previously released anthology horror film V/H/S.  The film is set for theatrical release on December 2, followed shortly thereafter by VOD and DVD release on December 6.

Our pilots are qualified through the FAA, having taken ground school courses and passed the Part 107 exam now required for commercial operations in the United States.  A proof of certificate is available upon request.

Our in-house drone is the DJI Inspire 1, which provides lifting landing gear for 360 degree panoramic camera angles, along with dual controllers for segregated flight and camera control by two operators.  The on-board stablized camera shoots in UHD 4K video, and can also shoot 14 megapixel DNG raw and JPEG still photos.  Standard rates are now available for single or dual operator sessions for both half-day and full-day projects.

Many important regulations exist through Part 107 of the Federal Aviation Regulations.  We are familiar with these rules, and follow them at all times, ensuring the safest aerial photography session every time we lift off.  Coupled with our intimate familiarity with the landscape in the Savannah region, the new regulation framework allows us to finally offer this service. 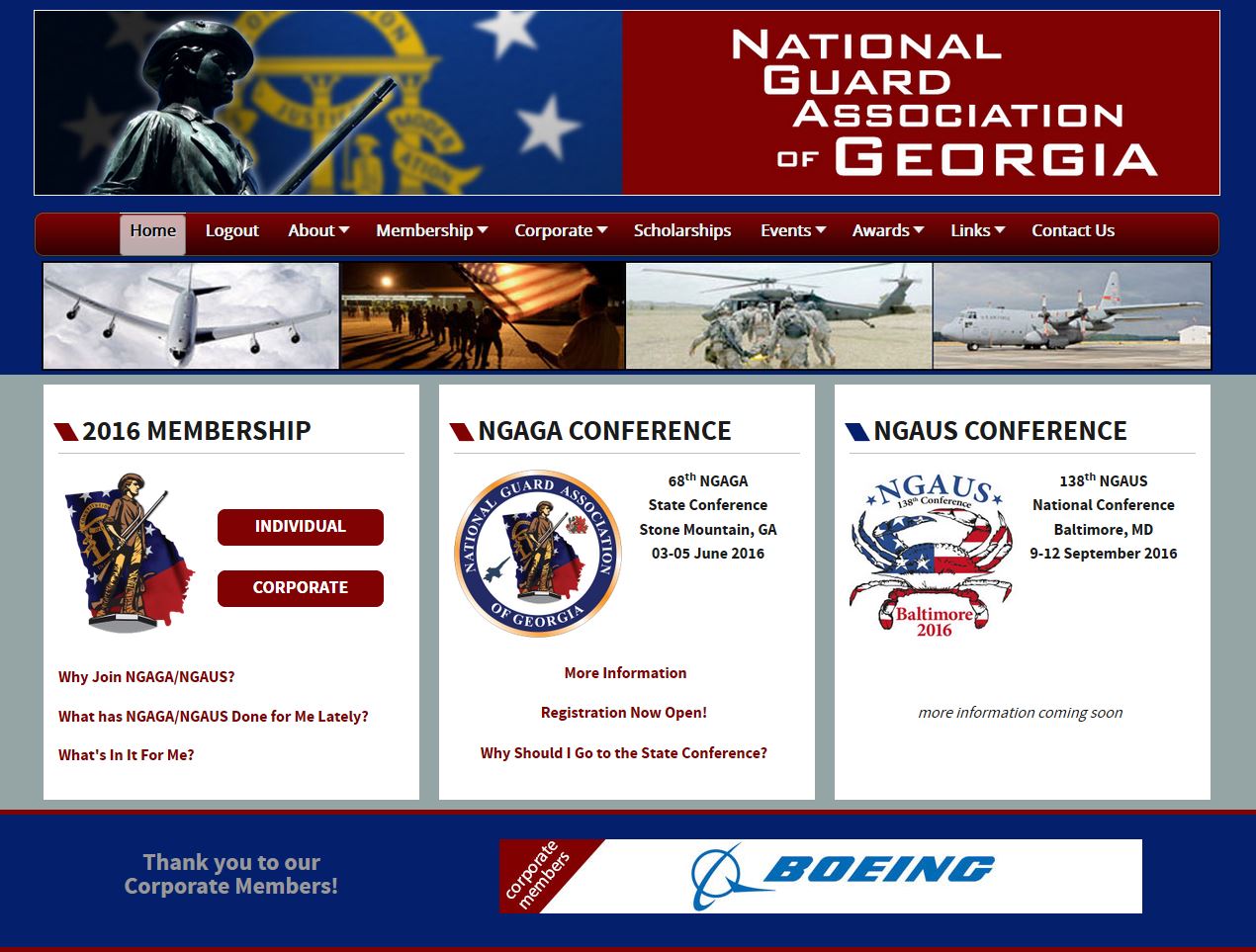 Furthermore, this past week marks an especially momentous occasion - the relaunch of their web site, which we have designed and hosted for that same period of time.

The new site, like all the sites we build, runs on the current iteration of the Joomla! content management system (CMS).  Together with our client, we have watched Joomla! grow (like "Jeb!," they have yet to drop the exclamation point from their brand) into a very powerful and extensible web production platform.  The NGAGA site serves as the central membership database of the organization, and the point where nearly all of their members pay their dues as well as register for various events throughout the year.

Although the new system carries forward the existing user database, the rest of the site is a result of a drastic makeover in terms of technology and graphics.  This new site is now responsive, for optimized use across all screen sizes and devices.  It comes with a fresh event registration system, complete with QR code functionality for quick check-in of their members at events.  Extensive back-end improvements have made management of members, events and site content more streamlined.  And, because it runs the most current and modern version of the CMS, the security of the site is more ensured.

Celeste Headlee's great TED Talk on "10 Ways to Have a Better Conversation," which eThree Media filmed live at the 2015 Savannah TEDx Creative Coast event, has been promoted to the TED homepage today, quickly receiving over a quarter-million views in a matter of hours.

eThree Media collaborated with MyVista and Longwater to produce this looping video, which is to be projected on the Broughton Street side exterior of the SCAD Jen Library for the 2016 Telluride Mountain Film Festival On Tour in Savannah.  The piece serves as a meditation on endangered species of plants and animals in southeast Georgia. The odd aspect ratio is due to matching three equivalent 16:9 projectors horizontally.  The estimated actual projection size will be over 100 feet wide when it runs during the film festival.

Bea Wray of The Creative Coast interviewed Eric Darling for the organization's weekly podcast, which features some of the area's most innovative and creative people.  Have a listen!