We are proud to be working with our good friends at Michael Gaster & Associates on a new series of empty venue concerts featuring Savannah area musical talent.

With the unprecedented impact of so many stay-at-home orders, performers and technical crew were suddenly thrust into a new world - a world where the paradigm of how to play for audiences just up and changed radically. In late March of 2020, Michael Gaster reached out to Eric Darling to discuss a partnership to bring the best of Savannah's music scene to the world, and Quarantine Concerts was born.

In the end, no more than five crew members produce each and every show at the perfectly spacious and well-appointed Tybee Post Theater.

Although the credit list that runs at the end of every live show isn't very long, it's jam-packed with the names of people who have made a full commitment and tireless effort... Charrisa Murray of DeVivo Marketing, who handles the web site and all social media. Brad Binion, who sets and runs lights, mics and literally simultaneously runs a camera during the events (we don't know how he does that, either). Doug Suttle, who runs a camera, is also heading up a secret squirrel 3D project. Eric Darling runs the video department, directs the shows, and handles post-production. And last, but not least, Michael Gaster curates the musical program and provides the live mixing that makes Quarantine Concerts so worth the listen.

Some of the local acts gracing the Tybee Post stage (online) have been Lulu the Giant, the Eric Jones Trio, Bero Bero, Lyn Avenue, Draucker! and Phantom Wingo, among a growing list of many other talented and generous musicians who are providing a wonderful online escape for as many people as possible. Together, we stand for musicians who deserve an audience, and an audience who deserves a best effort at delivering the highest quality viewing and listening experience in a live steaming environment.

While "tickets" are sold for events, they are merely suggested donation amounts. These donations go to benefit the musicians, venue and production crew, who all sincerely appreciate even the smallest of contributions from an appreciative audience. You can catch previously streamed concerts on the Qurantine Concerts Videos page. We hope you enjoy! 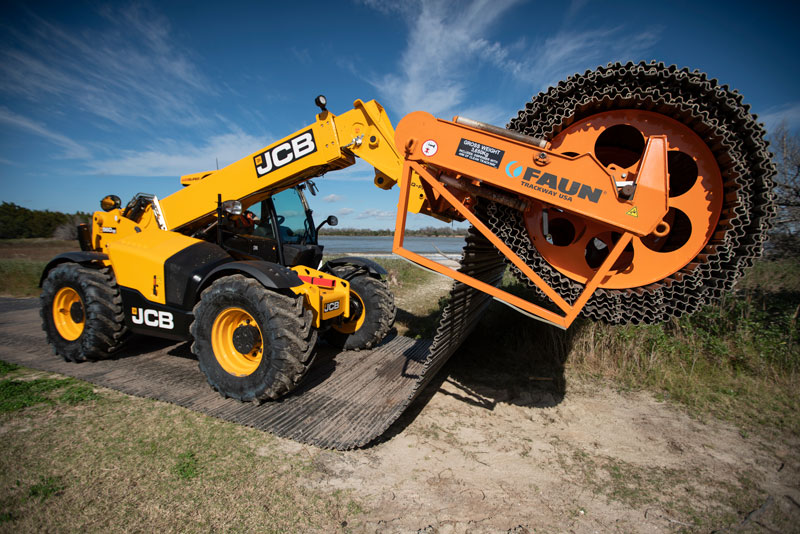 Faun Trackway engaged eThree Media for three days of filming and photography on location around southeast Georgia with their new Roadway Kit. This innovative commercial product rolls off of a hydraulically powered spool to lay down a temporary but rugged access route across nearly any natural surface such as sand, marsh, snow and even river fords. Because the track deploys and recovers quickly, it can be re-deployed in a strategically short period of time.

As Faun Trackway attends the CONEXPO-CON/AGG conference in Las Vegas this March, they are showcasing this new kit by way of the video produced by eThree Media, while promoting their presence at the trade show with stills we shot simultaneously.

eThree Media's photography also features prominently on the new product page at Faun Trackway's web site and in the brochure.

As 60% of businesses now spend more than a quarter of their marketing budget on video, it is clear that video has become a preeminent form of marketing for organizations of all types and sizes.

As a Savannah-based video production company, eThree Media employs decades of professional experience to create useful videos for our clients. We rely on client feedback to ensure we are consistently delivering quality videos, so we are grateful for companies like Clutch that allow us to receive vetted, high-quality client feedback that we can trust.

Clutch is a research platform for B2B service providers. On their website, they rank and review B2B companies and even feature feedback from clients. On Clutch, a prospective client can explore our previous projects.

One of our recent projects was for a regular client who is a major healthcare services provider. We produced a video that incorporated drone footage with graphics to highlight the growth expected for their organization in the next few years. The Marketing Manager of this healthcare provider left the following review and rating: 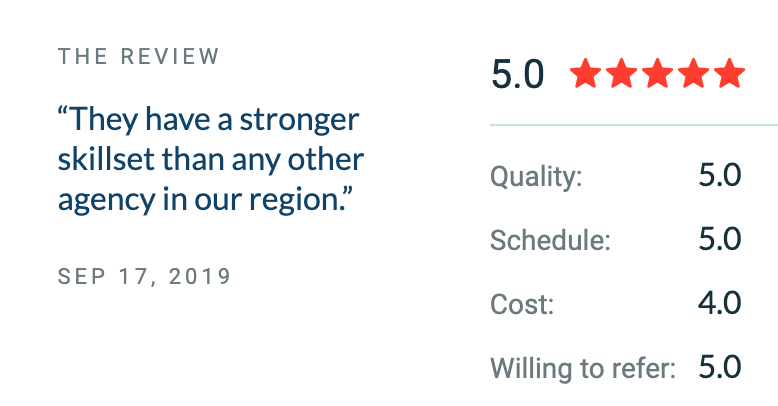 At eThree Media, we take client relationships and client feedback very seriously. We want to make sure that our end results meet the client’s needs, and getting their feedback is the best way to do that. Because of our emphasis on client satisfaction, we have been able to build long-standing relationships with various clients, something we are very proud of. This client is an example of an ongoing relationship we have developed over the years, and here is another quote from their Marketing Manager:

“We've worked with them for the past twenty years. They're our go-to agency for all of our audio and video needs.”

eThree Media was also featured as a top video production company on The Manifest, Clutch’s sister site. You can learn more about us (#114) on The Manifest, which is another buyer’s guide for B2B services.

Visual Objects is a website where prospective clients can go to watch some of our latest videos. Video marketing is one of the most effective marketing tools, and an eThree Media video can help increase your market presence.

A quote from a Forbes article says that “Your brand is not a stagnant strategy on a piece of paper — you must bring it to life.” You can bring your brand to life with a high-quality video, and at eThree Media we are prepared to create video products that will achieve your goals.

Contact us today about how we can create video content that will compel your audience, support your brand and grow your business. 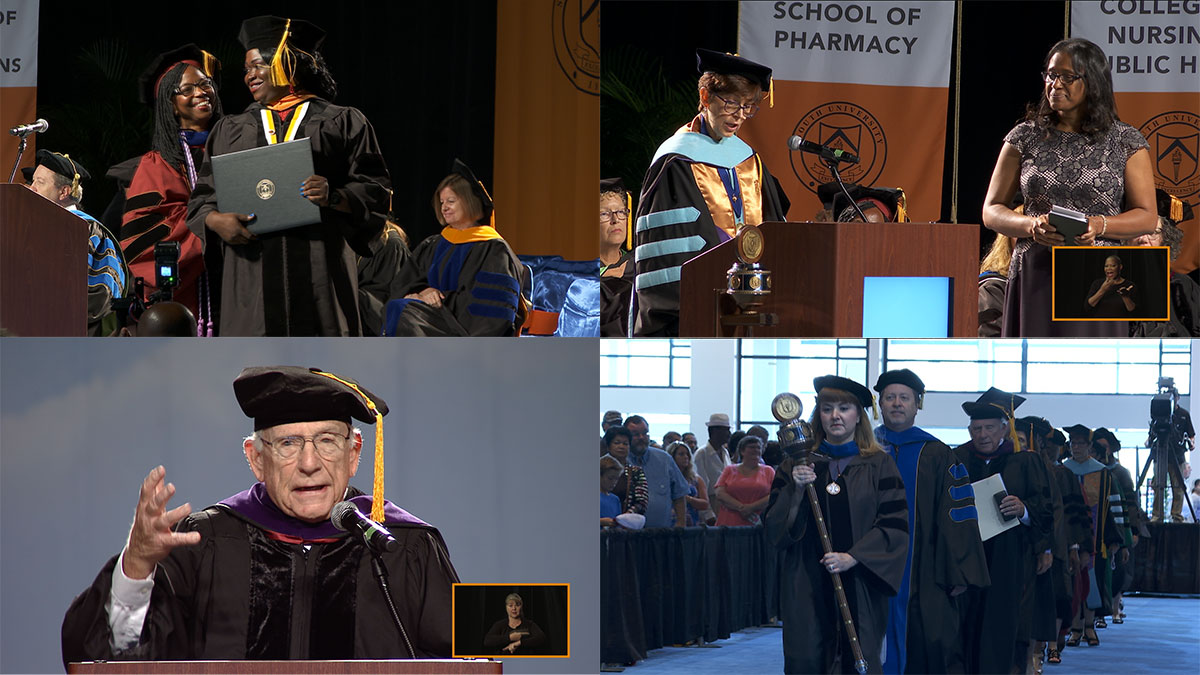 For the fourteenth year running, eThree Media produced live multi-camera switched videos for South University's Savannah and Online Commencements. The events draw nearly 5,000 attendees to Savannah's International Trade and Convention Center each June. These events fill the 96,000+ square feet Exhibit Hall, where two ceremonies occur in one day. We utilize four cameras to cover the events, with one sporting a super-telephoto lens to get close-up shots at the podium from 300 feet away. Another camera is wireless and mobile for part of the cermony, while another is dedicated to filming a boxed sign language interpreter on demand for sections of the ceremonies. The switched feeds are livestreamed to South University's own site and to their social media pages simultaneously.

Video roll-ins for the singing of the Star Spangled Banner along with a long comprehensive graduate credit roll are switched in live as well.

Despite the technical setup, our crew accomplishes it completely in a single day, and then a total strike immediately at the end of the last commencement ceremony. Even higher quality videos are recorded on location and provided to the school afterwards.


eThree Media worked with Bridgestone's OTR division to produce new assets in the field for use in videos highlighting their various products. Traveling to mining and construction sites across the country, our team shot multiple hours of footage on both terrestrial and drone aerial platforms for the purpose of building an asset library for the Fortune 500 company.

eThree Media provided a combination of grip, electric, sound, and drone aerial services for the production of several videos honoring visionary golf course designer Pete Dye. Dye designed Hilton Head Island's Harbour Town course, which has featured as the first stop after Augusta National on the PGA Tour for many years, and it is the focus of this piece. The video was produced and directed by Tony Richards, of Nouveau Richards Productions in St. Louis, Missouri.

Motocross and Supercross riders are true athletes, and the elite train constantly, both on and off the track. In searching for a partner to help build and maintain the appropriate tracks needed near Center Hill, Florida, Baker's Factory chose JCB as their equipment provider. In this video, the principal staff at Baker's Factory tell the story of how they came to partner with JCB, and how that decision has impacted their operation.

For eThree Media, the challenge of telling this story, condensed into an easily digested four-minute piece was compounded by some stubborn central Florida rain storms that threatened to wash out the entire shoot. Flying our drone between the rain drops and stealing moments afforded by a state-of-the-art weather radar app to shoot outdoor interviews, we were able to gather just enough footage. Fortunately, being such a premier facility, Baker's Factory is constantly being filmed by a variety of productions, and so when we asked for some Motocross footage to help round out what we were unable to gather on our trip, they could help us out. Matt Dale, who operates their machines, also has a helpful habit of filming time lapses of his track building and maintenance, so his GoPro footage came in very handy as well. The result represents a true team effort between these three companies to breathe life into what is truly a unique and compelling story.

eThree Media completes work on a new comprehensive corporate history video for Great Dane, the Savannah-based manufacturer of commercial transportation equipment.  Over one year in the making, this project required a deep dive into the company's story, which covers more than 115 years.

In collaborating with Great Dane for over 17 years, the eThree Media team has a unique insight into the culture and evolving nature of the dynamic company.  Staying aligned with the voice of the brand was a mission critical aspect of the job, and one with which we are proud to have been trusted.

When the need arose, JCB chose eThree Media for the rapid production of their Teleskid product reveal video.  This new machine represents the first of its kind -  a skid steer loader that has telescoping capability.  Theirs was already the only skid steer machine that uses a single arm and side door entry.  In complementing that unique design, JCB now offers significant additional comptetitive advantage over any other manufacturer.

Because the unique telescoping single arm is the standout feature of the new machine, it receives the penultimate placement in the short teaser video.

Due to the need for immediate roll out to their dealer network prior to public release, the production window was incredibly short.  With only four hours notice, the request to produce the video was met by eThree Media on location with all necessary equipment and personnel.  Fewer than twenty-four hours later, the final video was approved and ready for events.  Although such a turnaround time is highly unusual, it was an exciting project to coordinate and produce, including everything from the creative treatment, shot list and post production, which all took place within a single day.  This project encapsulates the surprise and fun that can come through great trust and great support built on the foundation of a good story.

eThree Media produced drone shots that open and close the newly released trailer for Chiller's upcoming feature release, Siren.  Director Gregg Bishop requested a series of aerial shots piloted by eThree Media's principal, Eric Darling, with camera control by camera operator, Tim Gill, who also served as 2nd Unit DP on the film.  The original drone footage serves both as standard shots as well as plates for several special effects shots in the upcoming horror movie based on a short contained in the previously released anthology horror film V/H/S.  The film is set for theatrical release on December 2, followed shortly thereafter by VOD and DVD release on December 6.